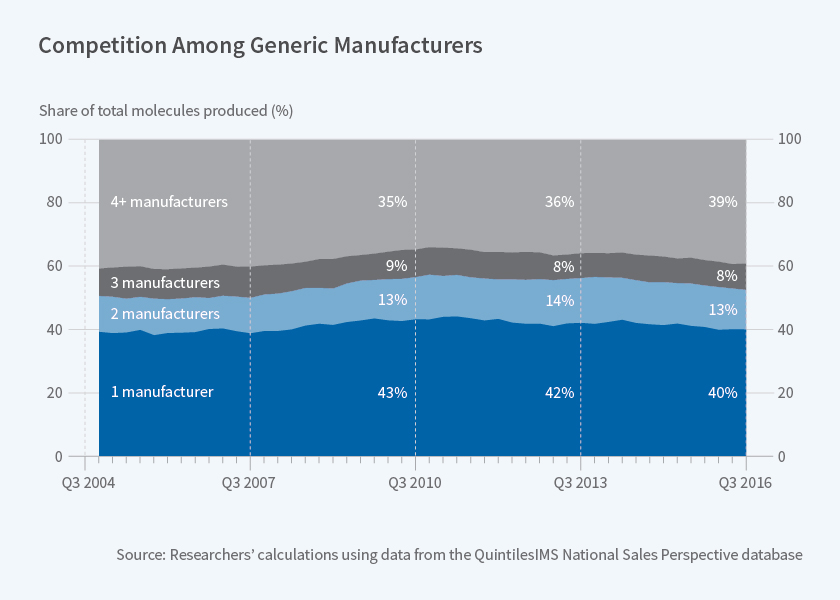 Most generic drugs are produced by only one or two firms, and the weak or nonexistent competition is associated with high prices.

Amid news reports of price gouging and shortages of off-patent prescription drugs, a new study finds that the market for generic drugs is dominated by small-revenue products with only one or two producers. Ernst R. Berndt, Rena M. Conti, and Stephen J. Murphy examine how market forces, regulatory changes, and expanded insurance have affected the supply of and demand for off-patent (generic) prescription medication in The Landscape of U.S. Generic Prescription Drug Markets, 2004–16 (NBER Working Paper No. 23640). 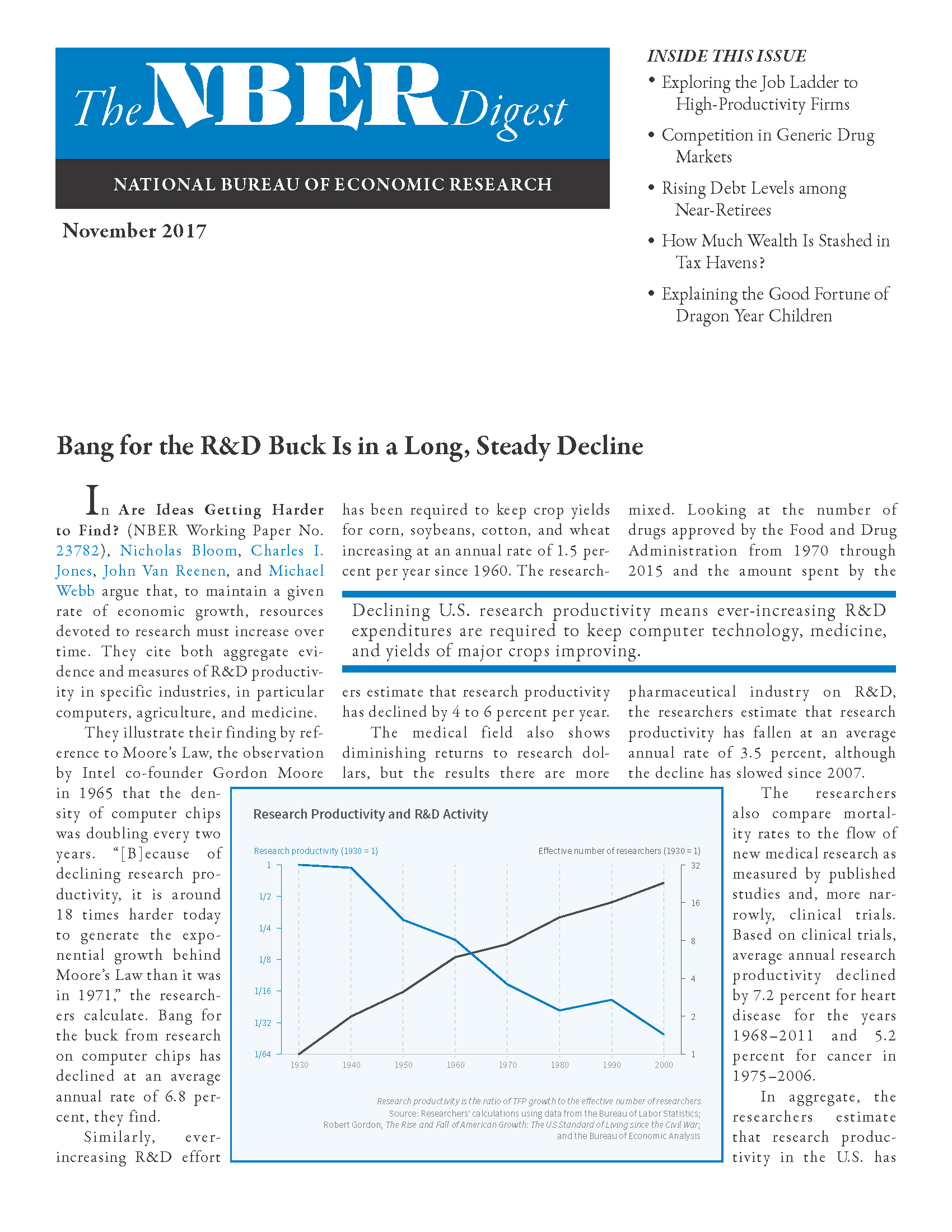 Bang for the R&D Buck Is in a Long, Steady Decline

How Much Wealth Is Stashed in Tax Havens?

Generics have become a major factor in the U.S. drug market. In 1994, they accounted for just 36 percent of U.S. prescriptions; by 2015, their share was 87 percent. The researchers attribute this dramatic increase to expanded drug insurance, first for seniors in 2006 with changes in Medicare, and then for the entire population a decade later through the Affordable Care Act. Both Medicare and private prescription drug plans have used tiered copay structures that encourage the use of generics. Meanwhile, on the supply side, a significant number of “blockbuster” branded drugs went off patent, stimulating market entry by generic producers.

The researchers describe conventional wisdom as suggesting that generic entry should have resulted in a “virtuous circle: increasing access to safe and effective treatments for chronic diseases, and ever-declining prices.” The reality has been different. The researchers find that between 2004 and 2016, the trend has been toward less competition among generic drug producers. More than 50 percent of generic drugs have at most two competitors; for 40 percent of drugs, there is just one manufacturer. Competition is more vigorous in the market for generic drugs that can be taken orally than for drugs infused or injected into patients.

The researchers suspect that some government policies may have the unintended consequence of reducing the number of drug suppliers. They postulate that high user fees implemented under the Generic Drug User Fee Act of 2012 may have raised barriers to new firms entering markets while encouraging existing companies to leave.

A key finding is that the U.S. generic drug industry is composed of numerous relatively small firms with small product portfolios. Median inflation-adjusted sales revenues were $400,000 annually at the start of the study, doubling to $800,000 annually at the end. Mergers among such companies are likely to fall beneath the radar of the Federal Trade Commission and the Department of Justice, “resulting in near-monopolies of generic drug markets with minimal if any public scrutiny.”

The consolidation of generic markets is also associated with higher prices. The researchers hypothesize that price hikes might have been greater had it not been for increased buyer power that resulted from the consolidation of pharmaceutical benefit management firms and other bulk purchasers.