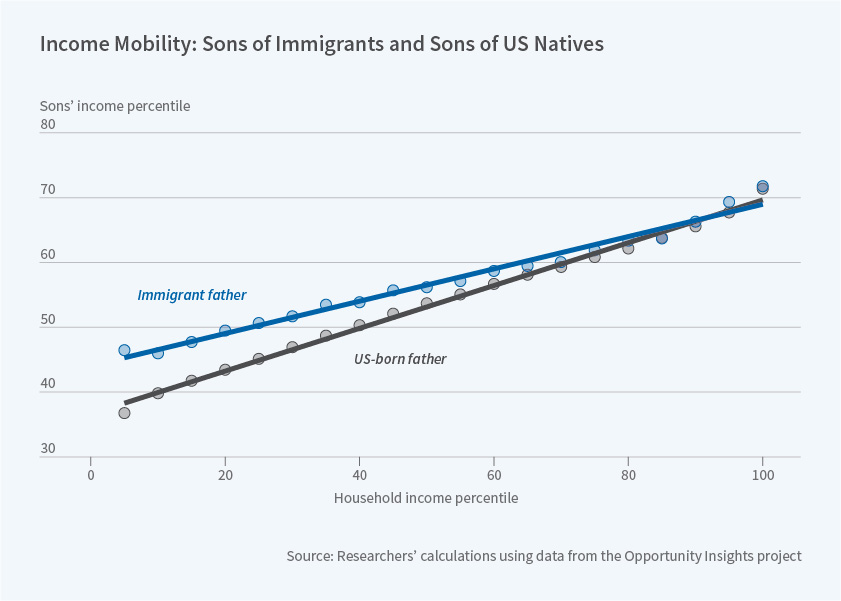 Sons of immigrant fathers experience more income growth than sons of US-born fathers, in large part because immigrants choose to settle where children have good prospects.

Analyzing waves of immigrants to the United States between 1880 and 2015, Ran Abramitzky, Leah Platt Boustan, Elisa Jácome, and Santiago Pérez find that sons of first-generation immigrants have greater upward income mobility rates than sons of US-born parents. This mobility gap is observed throughout more than 100 years of data and does not vary significantly over time, despite extreme changes in the immigrants' countries of origin and in US immigration policies.

In Intergenerational Mobility of Immigrants in the US over Two Centuries, (NBER Working Paper 26408), the researchers identify three cohorts of first-generation immigrants and US-born workers. The first two cohorts, totaling 4 million father-son pairings, were taken from the 1880 and 1910 censuses, which provided each person's name, year of birth, and place of birth. These cohorts and their sons were followed 30 years later, in the 1910 and 1940 censuses, respectively. (Daughters' records were difficult to trace due to name changes upon marriage and are not included in this study.) In the 1940 census, income data were reported; for the earlier census records, income data for each individual were imputed using other available information, such as occupation. The first cohort of immigrants, those observed in the 1880 census, arrived primarily from countries in northern and western Europe while the 1910 cohort includes more immigrants from southern and eastern Europe.

The third cohort was identified using administrative data on the income of 2.7 million father-son pairs provided by the Opportunity Insights project, as well as the General Social Survey, which includes occupational data. These immigrants arrived primarily from Latin America and Asia, and the researchers observe the children in the contemporary labor market.

One of the primary factors contributing to this gap seems to be that after arriving in the US immigrants have located in places where children have higher mobility prospects. The income mobility gap between children of immigrants and those of US-born workers diminishes by almost 70 percent when children's income levels are compared within a geographic region. When the researchers examined mobility data at the county level, the gap disappeared: the sons of immigrants and the sons of US-born workers earned the same when they grew up in the same county and the economic strength of the specific geographic region led to better or worse benefits for all.

The age at which a father arrived in the United States was related to upward mobility. The highest rates of upward income mobility occurred for children of fathers who arrived as adults, particularly when the fathers came from non-English-speaking countries. This could indicate that adult immigrant fathers' rank in the US income distribution did not necessarily reflect their true earnings potential, and that fathers who arrived as children had greater opportunities to acquire US-specific skills.