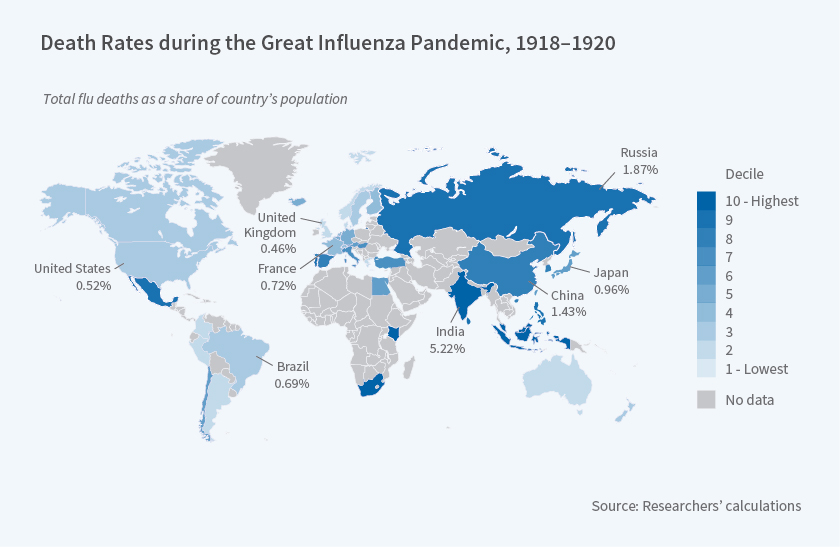 India lost 16.7 million people. Five hundred and fifty thousand died in the US. Spain's death rate was low, but the disease was called "Spanish flu" because the press there was first to report it.

An estimated 40 million people, or 2.1 percent of the global population, died in the Great Influenza Pandemic of 1918–20. If a similar pandemic occurred today, it would result in 150 million deaths worldwide. In The Coronavirus and the Great Influenza Pandemic: Lessons from the "Spanish Flu" for the Coronavirus's Potential Effects on Mortality and Economic Activity (NBER Working Paper 26866), Robert J. Barro, José F. Ursúa, and Joanna Weng study the cross-country differences in the death rate associated with the virus outbreak, and the associated impacts on economic activity.

The flu spread in three waves: the first in the spring of 1918, the second and most deadly from September 1918 to January 1919, and the third from February 1919 through the end of the year. The first two waves were intensified by the final years of World War I; the authors work to distinguish the effect of the flu on the death rate from the effect of the war. The flu was particularly deadly for young adults without pre-existing conditions, which increased its economic impact relative to a disease that mostly affects the very young and the very old. 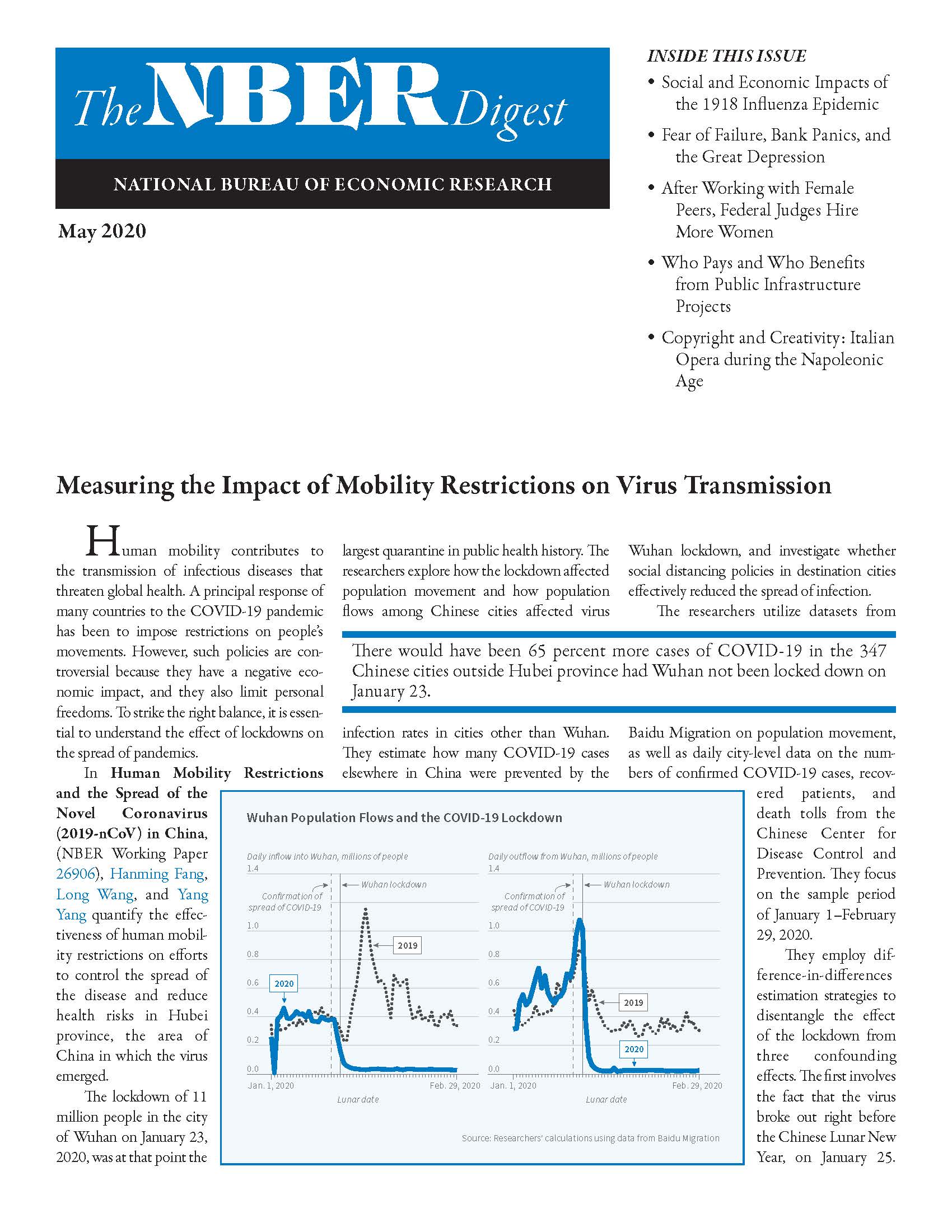 Fear of Failure, Bank Panics, and the Great Depression

Who Pays and Who Benefits from Public Infrastructure Projects

Copyright and Creativity: Italian Opera during the Napoleonic Age

The researchers analyze mortality data from more than 40 countries, accounting for 92 percent of the world's population in 1918 and an even larger share of its GDP. The mortality rate varied from 0.3 percent in Australia, which imposed a quarantine in 1918, to 5.8 percent in Kenya and 5.2 percent in India, which lost 16.7 million people over the three years of the pandemic. The flu killed 550,000 in the United States, or 0.5 percent of the population. In Spain, 300,000 died for a death rate of 1.4 percent, around average. There is no consensus as to where the flu originated; it became associated with Spain because the press there was first to report it.

There is little reliable data on how many people were infected by the virus. The most common estimate, one third of the population, is based on a 1919 study of 11 US cities; it may not be representative of the US population, let alone the global population.

The researchers estimate that in the typical country, the pandemic reduced real per capita GDP by 6 percent and private consumption by 8 percent, declines comparable to those seen in the Great Recession of 2008–2009. In the United States, the flu's toll was much lower: a 1.5 percent decline in GDP and a 2.1 percent drop in consumption.

The decline in economic activity combined with elevated inflation resulted in large declines in the real returns on stocks and short-term government bonds. For example, countries experiencing the average death rate of 2 percent saw real stock returns drop by 26 percentage points. The estimated drop in the United States was much smaller, 7 percentage points.

The researchers note that "the probability that COVID-19 reaches anything close to the Great Influenza Pandemic seems remote, given advances in public health care and measures that are being taken to mitigate propagation." They note, however, that some of the mitigation efforts that are currently underway, particularly those affecting commerce and travel, are likely to amplify the virus's impact on economic activity.

In a related study, Non-Pharmaceutical Interventions and Mortality in US Cities during the Great Influenza Pandemic, 1918–19 (NBER Working Paper 27049), Robert J. Barro analyzes data on the mitigation policies pursued by US cities as they confronted the flu epidemic. There were substantial cross-sectional differences in the policies that were adopted. Relative to the average number of flu deaths per week over the course of the epidemic, the number of flu deaths at the peak was lower in cities that pursued more aggressive policies, such as school closing and prohibition of public gatherings. However, the estimated effect of these policies on the total number of deaths was modest and statistically indistinguishable from zero. One potential explanation of this finding is that the interventions had a mean duration of only around one month.