U.S. Consumers Have Borne the Brunt of the Current Trade War 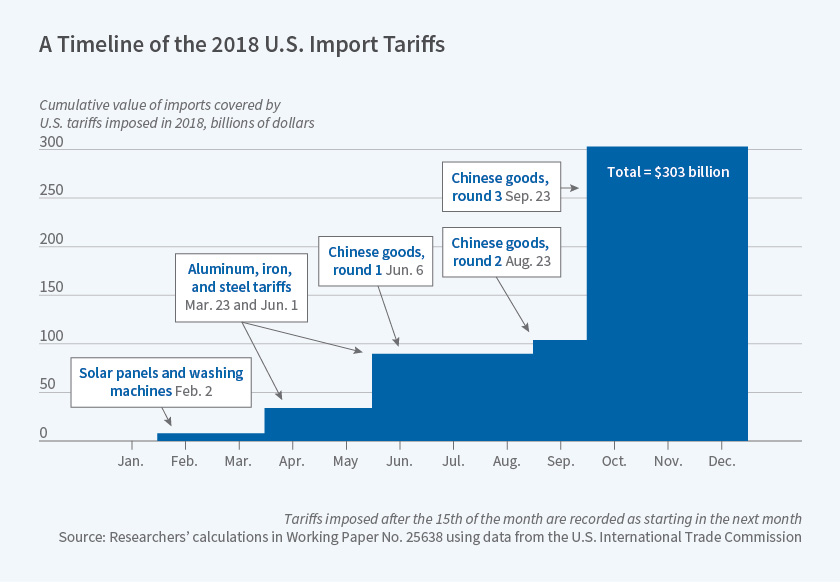 Recent tariff increases are unprecedented in the post-World War II era in terms of breadth, magnitude, and the sizes of the countries involved.

In 2018, the United States imposed tariffs on a variety of imported goods, and other countries responded with tariffs on imports from America. Two new NBER working papers analyze how this "trade war" has affected U.S. households and firms.

The recent tariffs, which represent the most comprehensive protectionist U.S. trade policy since the 1930 Smoot-Hawley Act and 1971 tariff actions, ranged from 10 to 50 percent on about $300 billion of U.S. imports — about 13 percent of the total. Other countries responded with similar tariffs on about $100 billion worth of U.S. exports. 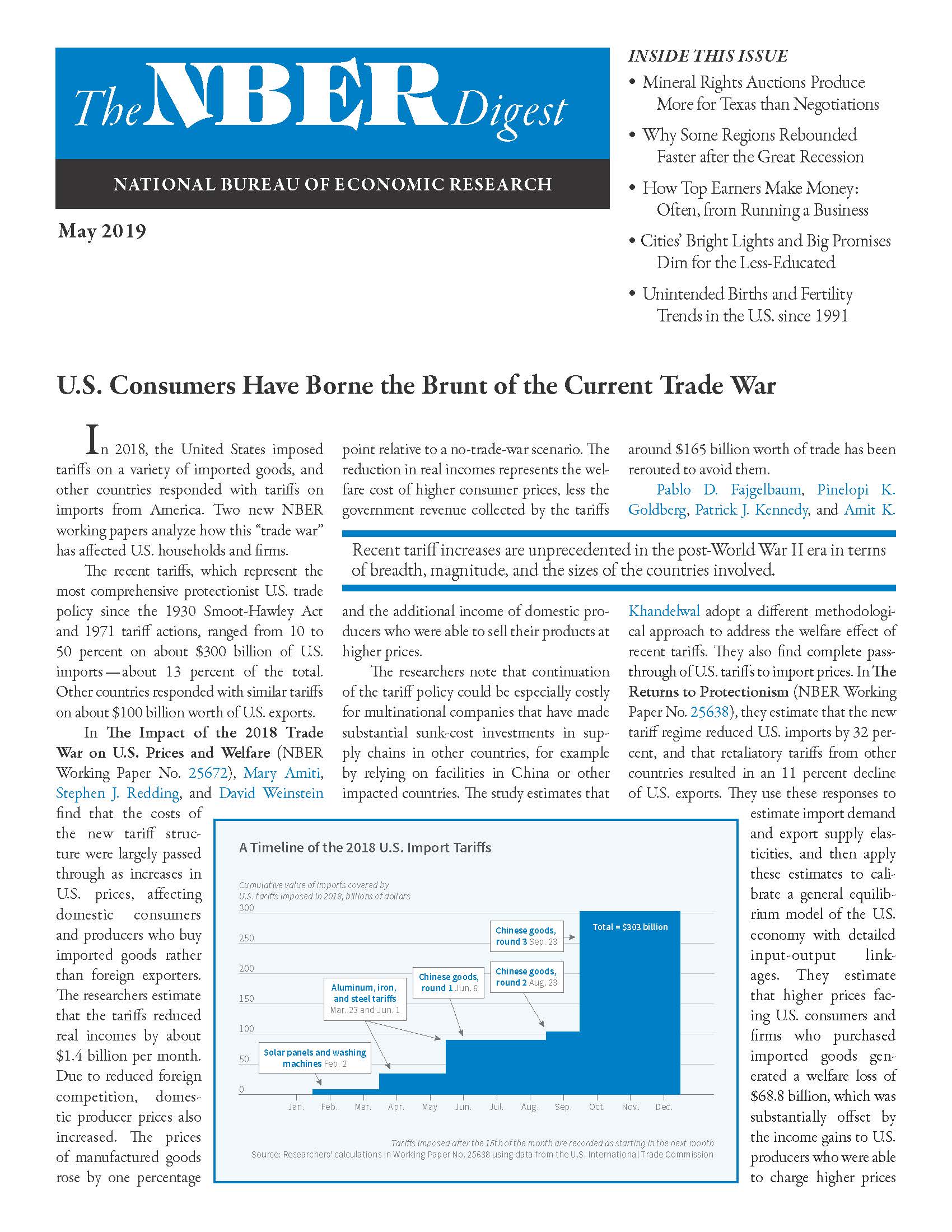 U.S. Consumers Have Borne the Brunt of the Current Trade War

Why Some Regions Rebounded Faster after the Great Recession

How Top Earners Make Money: Often, from Running a Business

Cities' Bright Lights and Big Promises Dim for the Less-Educated

Unintended Births and Fertility Trends in the U.S. since 1991

In The Impact of the 2018 Trade War on U.S. Prices and Welfare (NBER Working Paper No. 25672), Mary Amiti, Stephen J. Redding, and David Weinstein find that the costs of the new tariff structure were largely passed through as increases in U.S. prices, affecting domestic consumers and producers who buy imported goods rather than foreign exporters. The researchers estimate that the tariffs reduced real incomes by about $1.4 billion per month. Due to reduced foreign competition, domestic producer prices also increased. The prices of manufactured goods rose by one percentage point relative to a no-trade-war scenario. The reduction in real incomes represents the welfare cost of higher consumer prices, less the government revenue collected by the tariffs and the additional income of domestic producers who were able to sell their products at higher prices.

The researchers note that continuation of the tariff policy could be especially costly for multinational companies that have made substantial sunk-cost investments in supply chains in other countries, for example by relying on facilities in China or other impacted countries. The study estimates that around $165 billion worth of trade has been rerouted to avoid them.

Pablo D. Fajgelbaum, Pinelopi K. Goldberg, Patrick J. Kennedy, and Amit K. Khandelwal adopt a different methodological approach to address the welfare effect of recent tariffs. They also find complete pass-through of U.S. tariffs to import prices. In The Return to Protectionism (NBER Working Paper No. 25638), they estimate that the new tariff regime reduced U.S. imports by 32 percent, and that retaliatory tariffs from other countries resulted in an 11 percent decline of U.S. exports. They use these responses to estimate import demand and export supply elasticities, and then apply these estimates to calibrate a general equilibrium model of the U.S. economy with detailed input-output linkages. They estimate that higher prices facing U.S. consumers and firms who purchased imported goods generated a welfare loss of $68.8 billion, which was substantially offset by the income gains to U.S. producers who were able to charge higher prices ($61 billion). The researchers estimate the resulting real income decline at about $7.8 billion per year, a value broadly comparable to the net income decline estimated in the previous study.

The researchers use the estimated model to study the heterogeneous impacts across U.S. counties. The protective effect of the tariffs was greatest for states in the Great Lakes region and the Northeast, due to their industry structure. Meanwhile, sectors in rural areas of the Midwest and the Mountain West, such as agriculture, were hit relatively harder by retaliatory tariffs. The average real wage of workers in tradeable sectors declined by 0.7 percentage points, with a standard deviation of 0.4 percentage points across counties, with workers in the Midwest suffering more than those in other regions.

The researchers examine their findings through the lens of party voting in the 2016 presidential election. They find that the U.S. tariffs protected industries that tended to employ workers in the most politically competitive counties. Foreign governments imposed retaliatory tariffs in sectors based in more Republican-leaning counties. The researchers estimate that counties with at least an 85 percent Republican vote share bore losses over 50 percent greater than counties in which the Republican vote share was less than 15 percent.

To benchmark the consumer losses, the researchers highlight potential developments that could offset impacts of the trade war. For instance, one goal was to reduce intellectual property theft from China. To place this in perspective, China paid $8 billion in royalties for U.S. intellectual property in 2017. A substantial increase in royalty payments could offset part of the welfare loss.